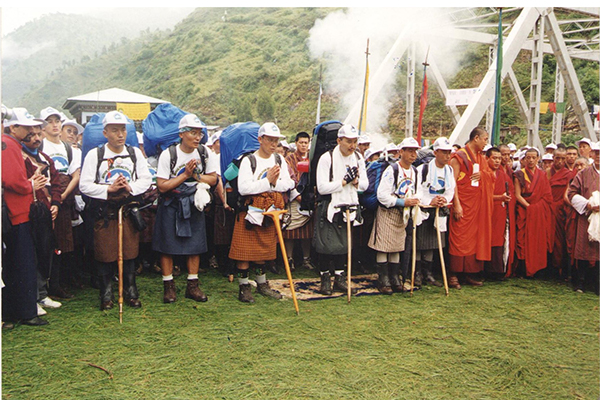 During the establishment of the Bhutan Health Trust Fund, donors from within and outside Bhutan enthusiastically donated recognizing the importance of Primary Healthcare in Bhutan. However, the initial momentum gradually slowed down and by 2002, the growth of BHTF had almost come to a standstill. In line with the 2002 World Health Day theme of “Move for Health”, Lyonpo Sangay Ngedup devised an idea to walk from the eastern part of Bhutan towards the capital to reinvigorate people’s interest in BHTF and also to highlight the importance of a good lifestyle for healthy living.

So, on the morning of the 25th September 2002, the walk was flagged off with well-wishers attending the ceremony and wishing the team success. Accompanied by six companions, the team overcame treacherous terrains, unforgiving weather and parasitic insects as the team traced ancient routes to reach the capital city. The daunting task ahead of them did not dampen their spirits with the team being greeted by thousands of people as they entered each Dzongkhags as a show of support and solidarity. The team stopped at villages, BHUs and Schools to talk and spread the message about healthy lifestyles. After a grueling 16 days, the team concluded the epic journey on October 10th, 2002 as they entered the historic Changlimithang ground, where the team was greeted by the Crown Prince His Royal Highness Dasho Jigme Khesar Namgyal Wangchuck, their Majesties the Queens and members of the Royal Family. The walk was a huge success with local and international media covering the journey. The walk created awareness and revived the initial capitalization of BHTF. Government organizations, international agencies, the diplomatic community, individuals, business houses, families and NGOS contributed to the health trust fund with the walk raising close to USD 2 million for the Bhutan Health Trust Fund.